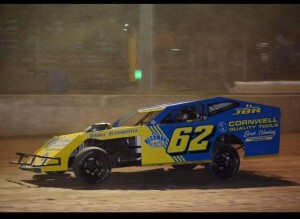 Vern was born September 6, 1963 in Quantico Virginia.  He was the son of the late Vernon C. Ford Sr. and Jeanie Ward.

Vern graduated from Franklin High School.  He was a self-employed, working in the construction field.   Vern loved dirt track racing.  He was a part of the pit crew for Robby Eyler and Andy Buckley Racing  and most recently Jesse Brock.  He collected memorabilia from NASCAR, dirt track racing, die cast cars and baseball cards.   Vern looked forward to taking his kids hunting every year.  He was always up for anyone to stop by and have a cold drink and listen to some classic rock.  It took a bit, but his kids did get him to listen to some newer rock recently.

Loved ones to cherish Vern’s memory; his mother Jeanie Ward of Polk, his children Shawn Aikins and his wife Jess of Meadville, Amber Cubbage of Harrisville, Matt Ford of Slippery Rock and Abigail Ford of Grove City and their mother Amy Jo Hoffman Ford of Harrisville.  His sister Brigitte Taylor and her husband Chuck of Polk. Vern’s 8 grandchildren also survive.

Vern was preceded in death by his father Vernon C. Ford Sr., he passed away November 24, 1982, and his step father Bruce Ward.

The Larry E. McKinley, Clintonville, is assisting the family with arrangements, no services are planned at this time.

Friends and family can email condolences by visiting www.mckinleyfuneralhome.net

To send flowers to the family or plant a tree in memory of Vern Ford Jr., please visit our floral store.

A Memorial Tree was planted for Vern

We are deeply sorry for your loss - the staff at Larry E. McKinley Funeral Home

Join in honoring their life - plant a memorial tree

You can still show your support by sending flowers directly to the family, or by planting a memorial tree in the memory of Vern Ford Jr.
Share a memory
© 2022 Larry E. McKinley Funeral Home. All Rights Reserved. Funeral Home website by CFS & TA | Terms of Use | Privacy Policy | Accessibility